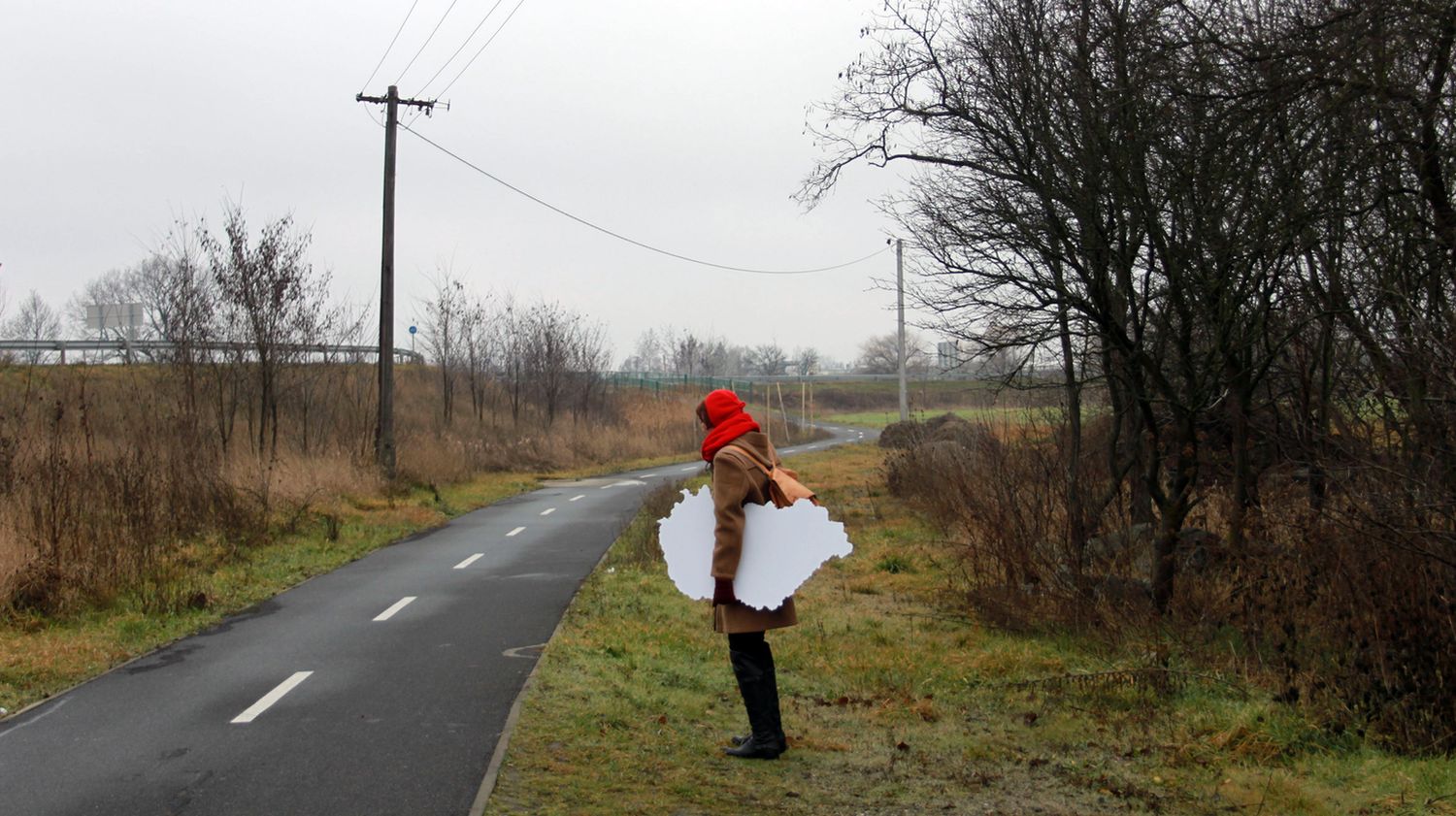 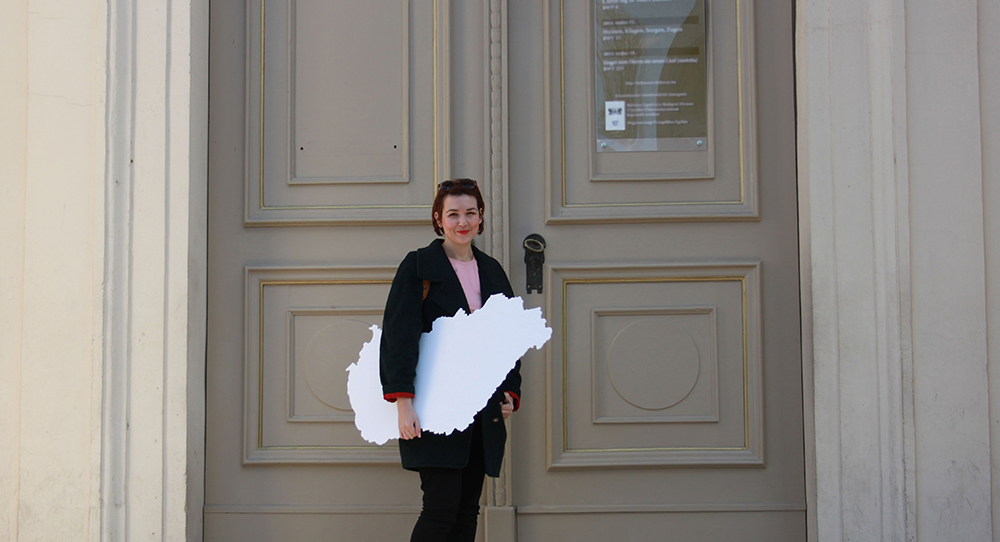 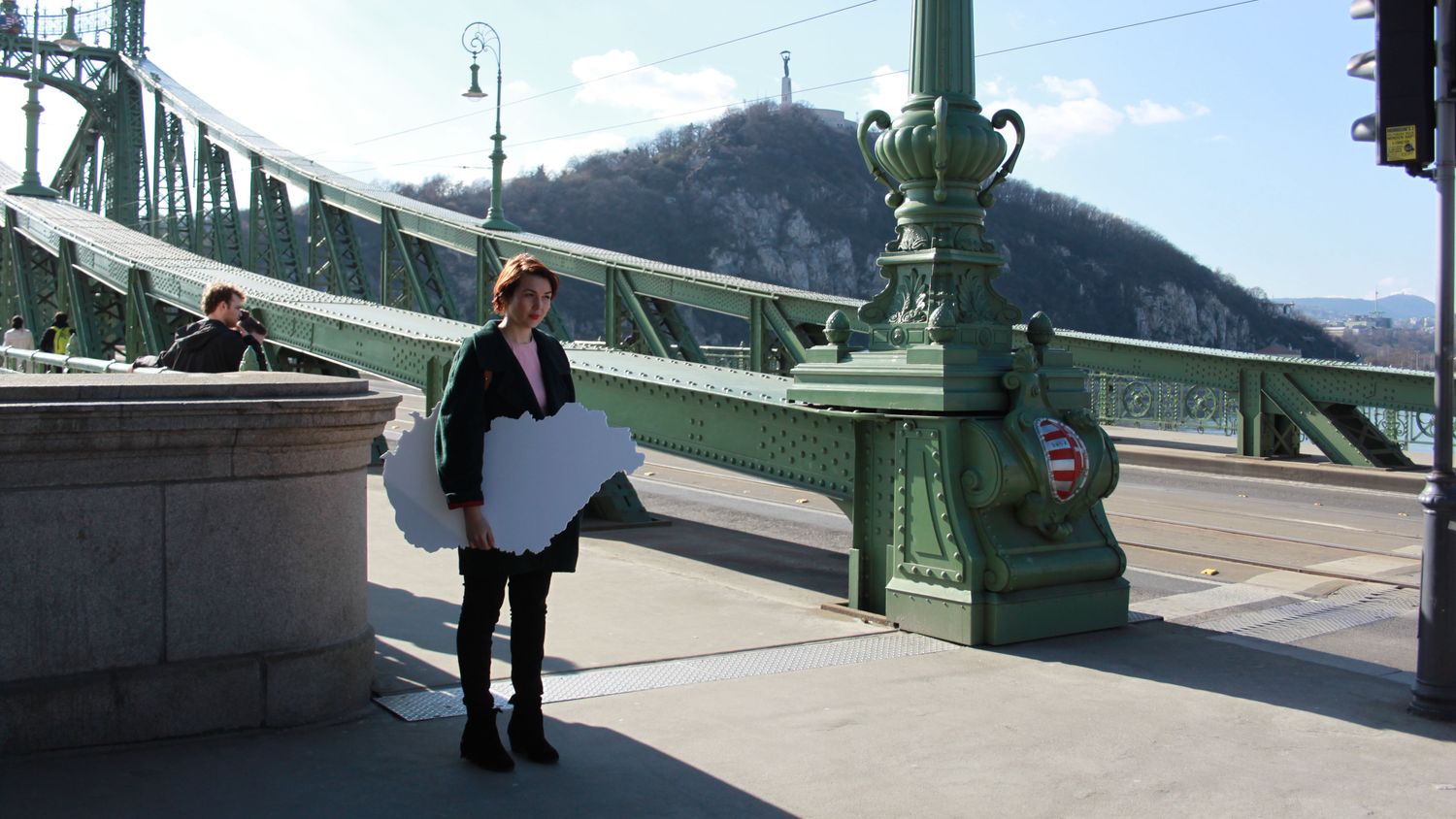 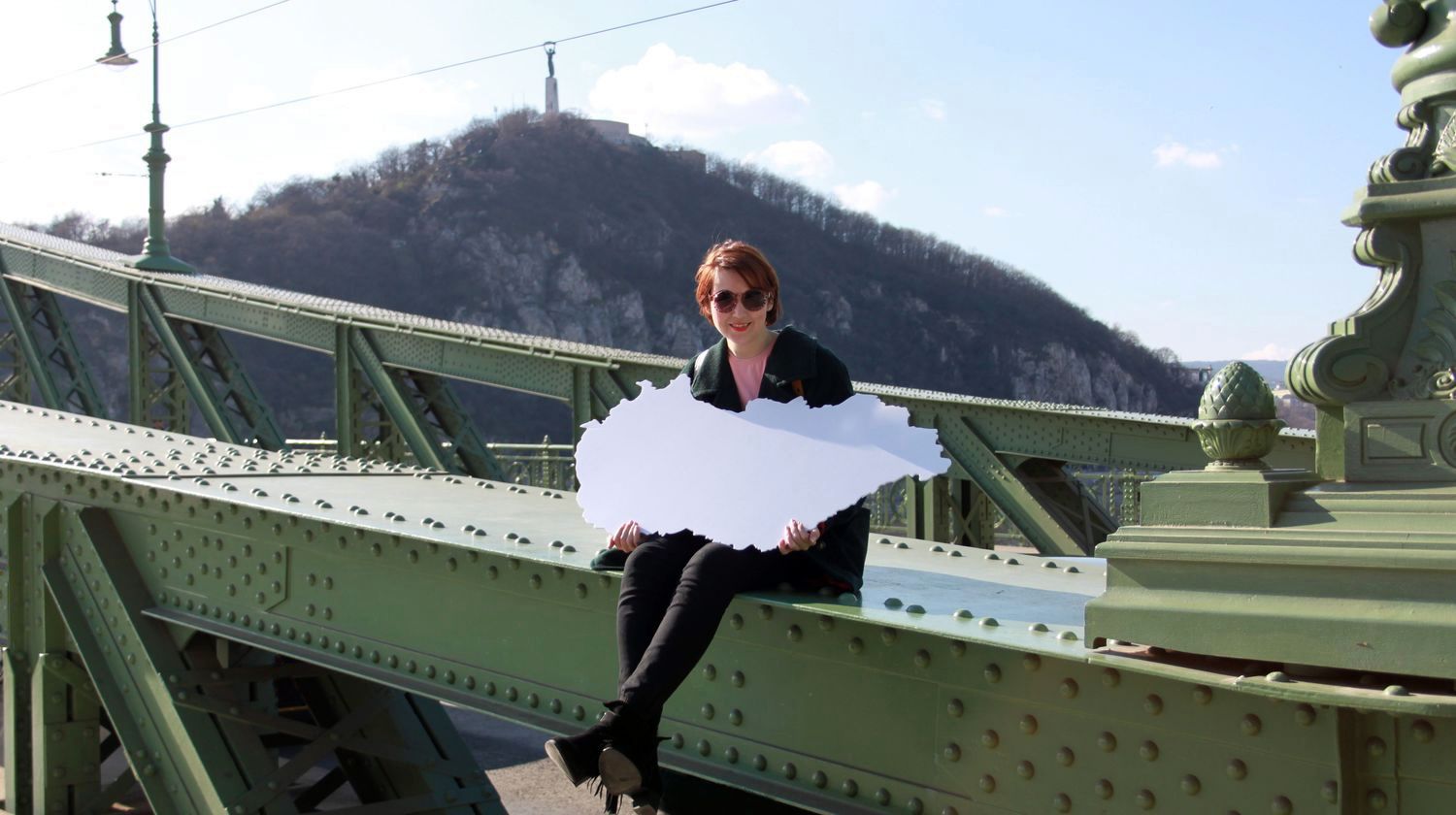 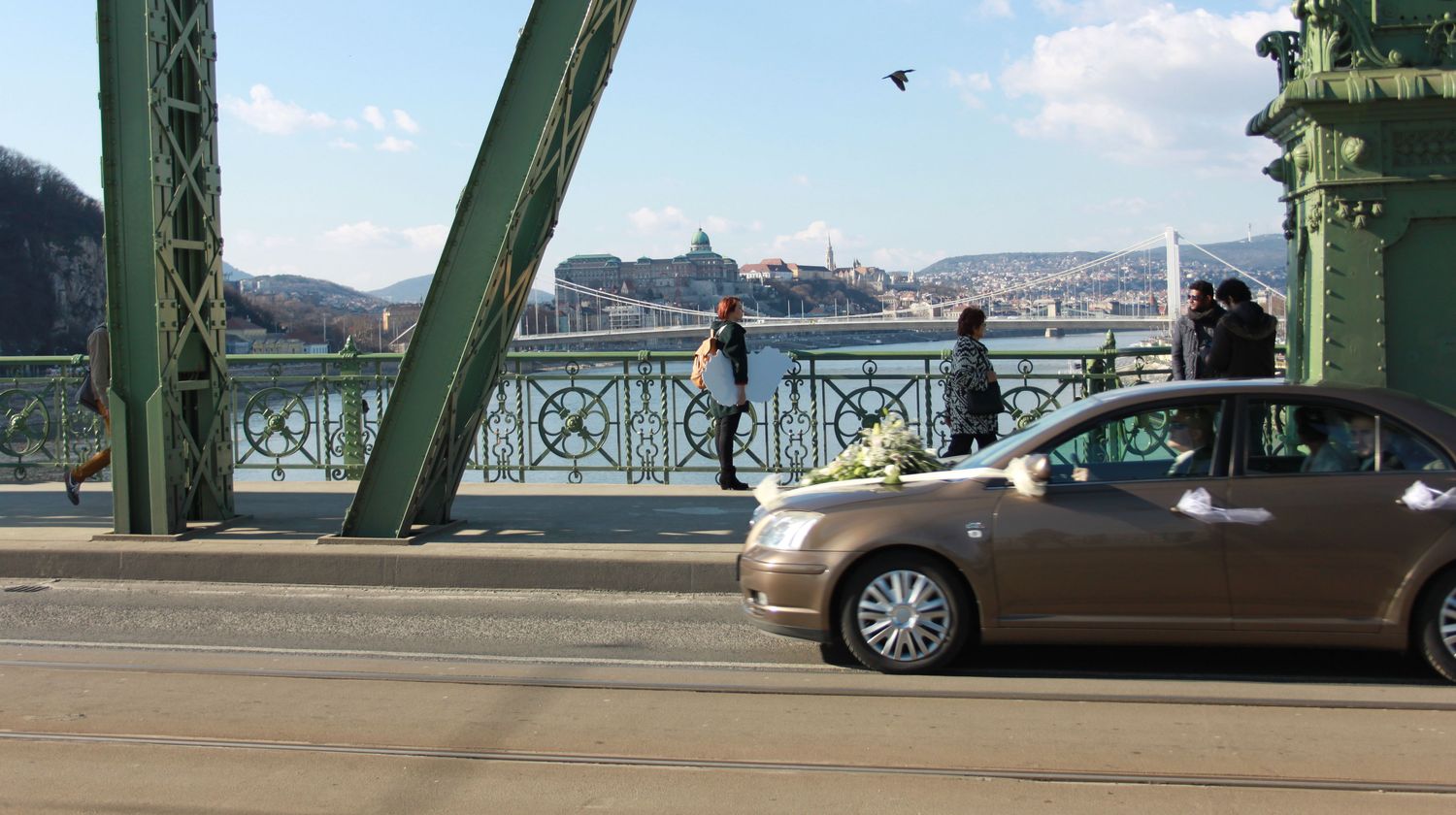 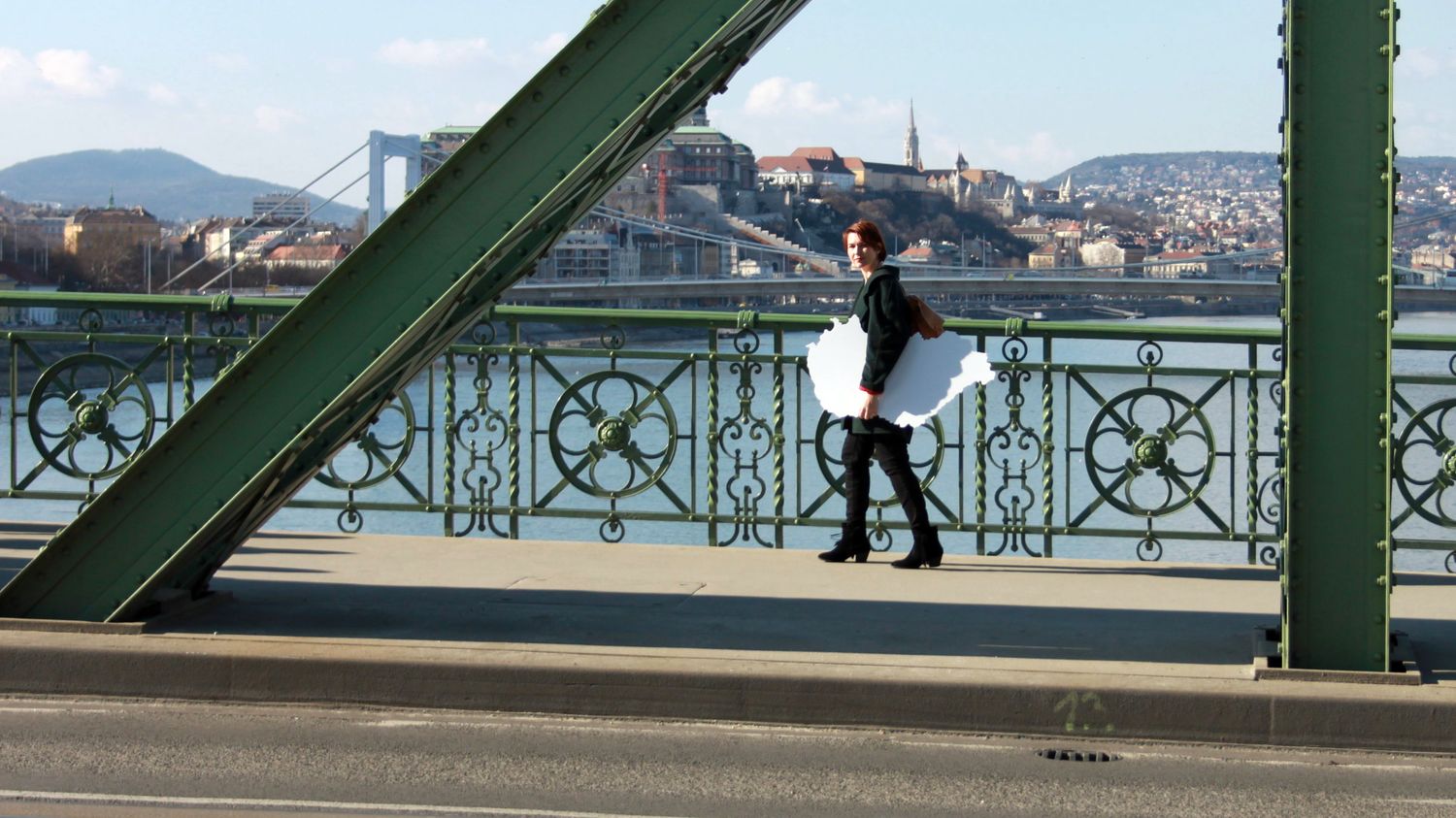 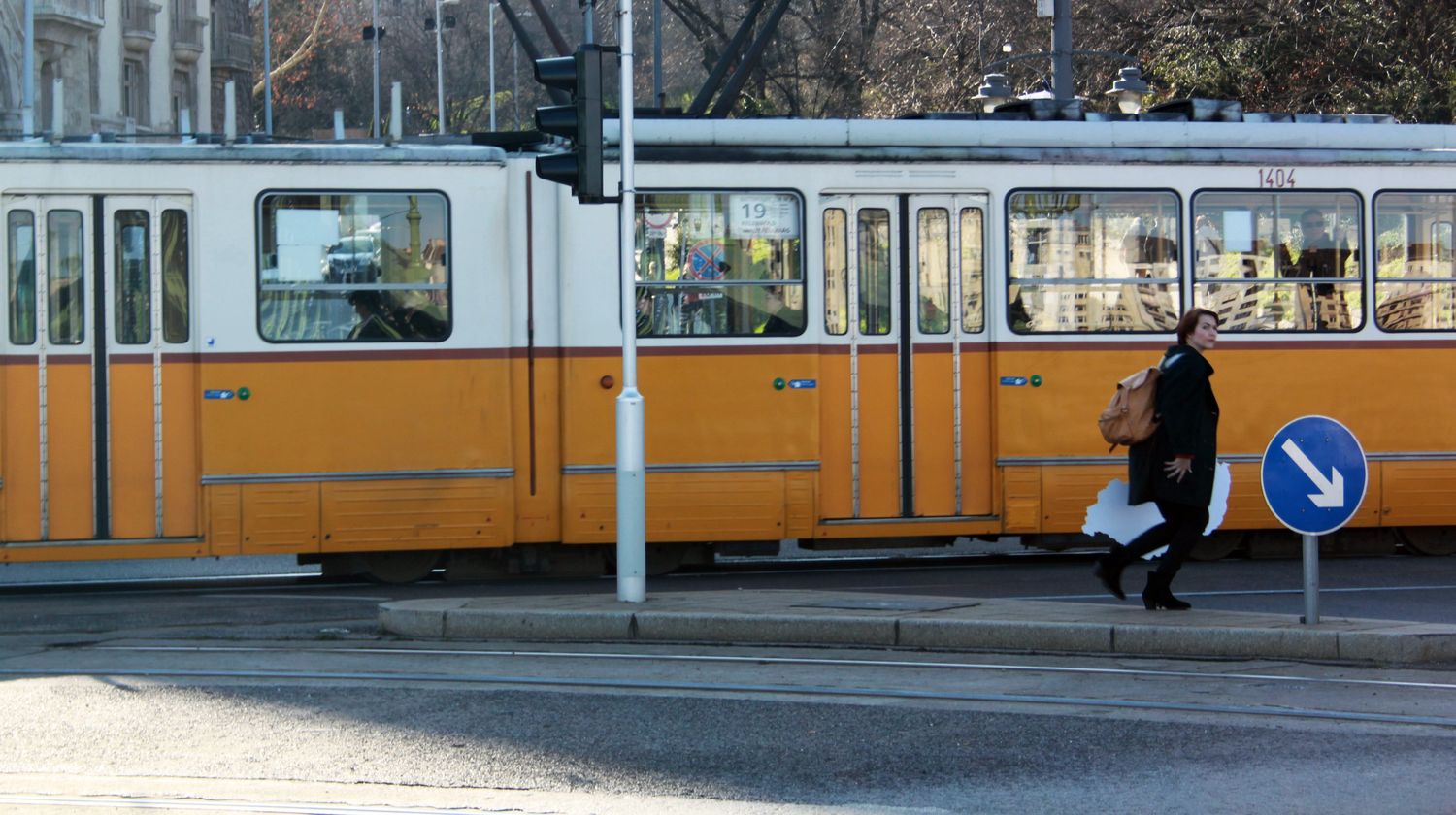 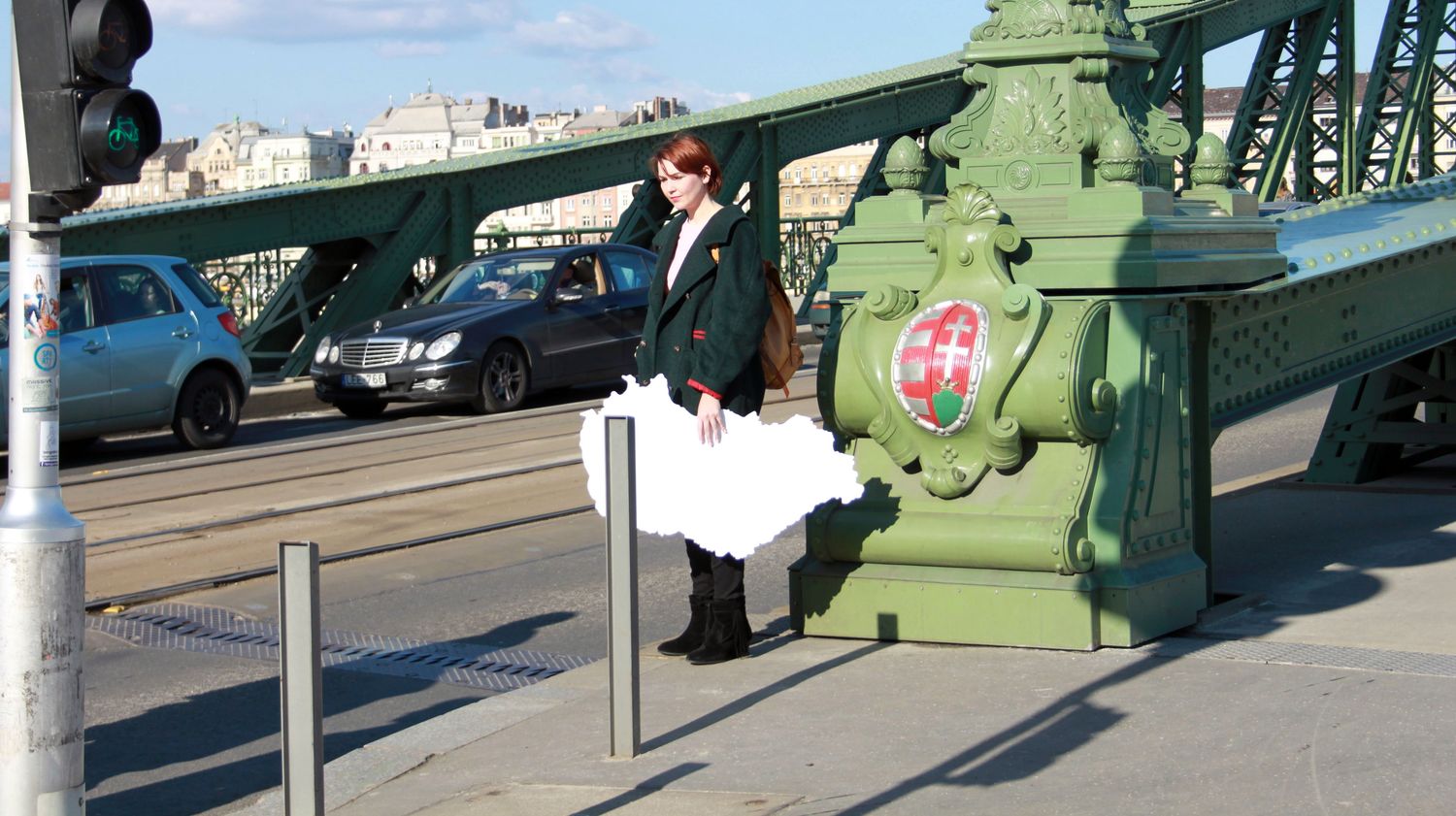 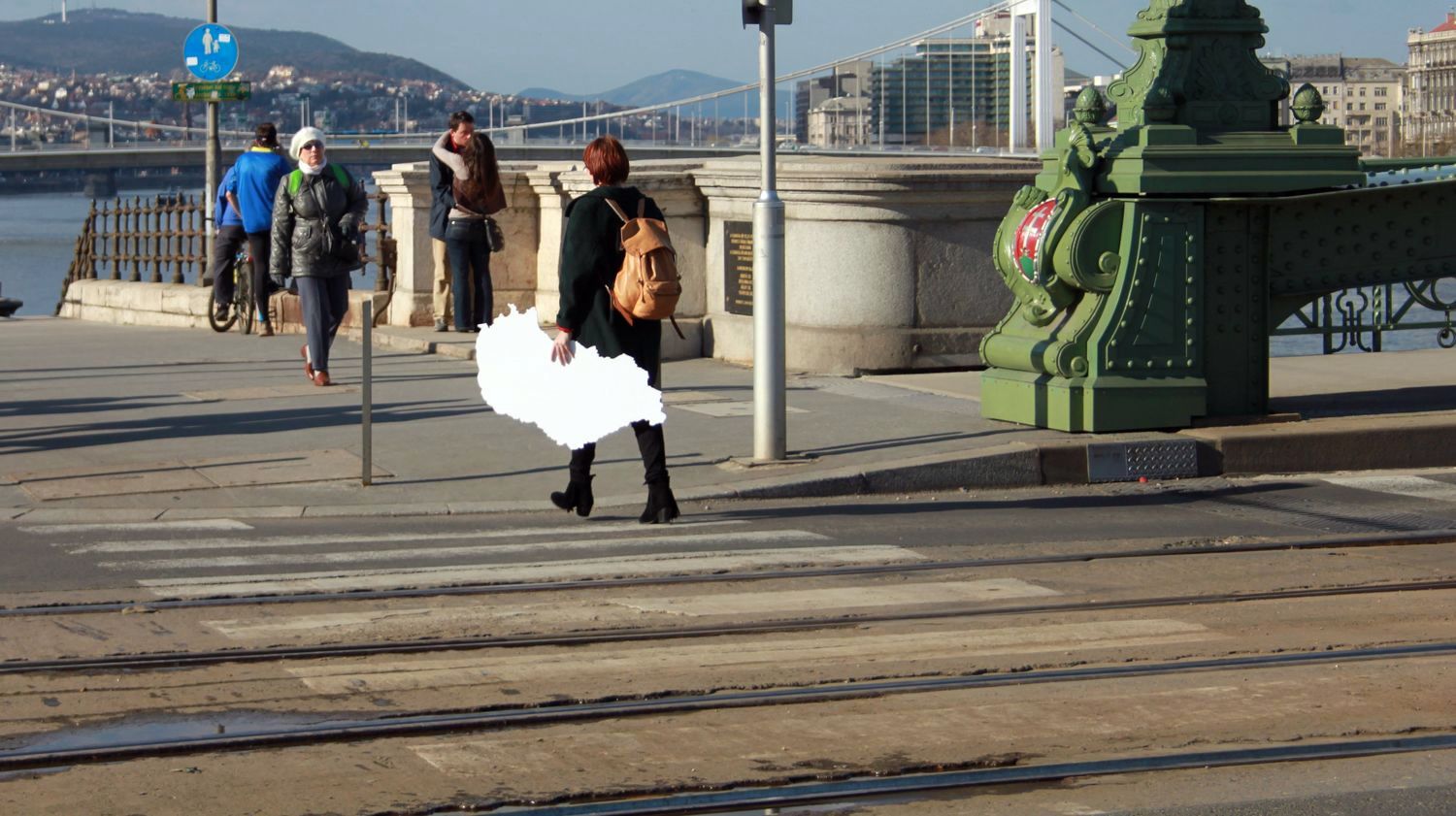 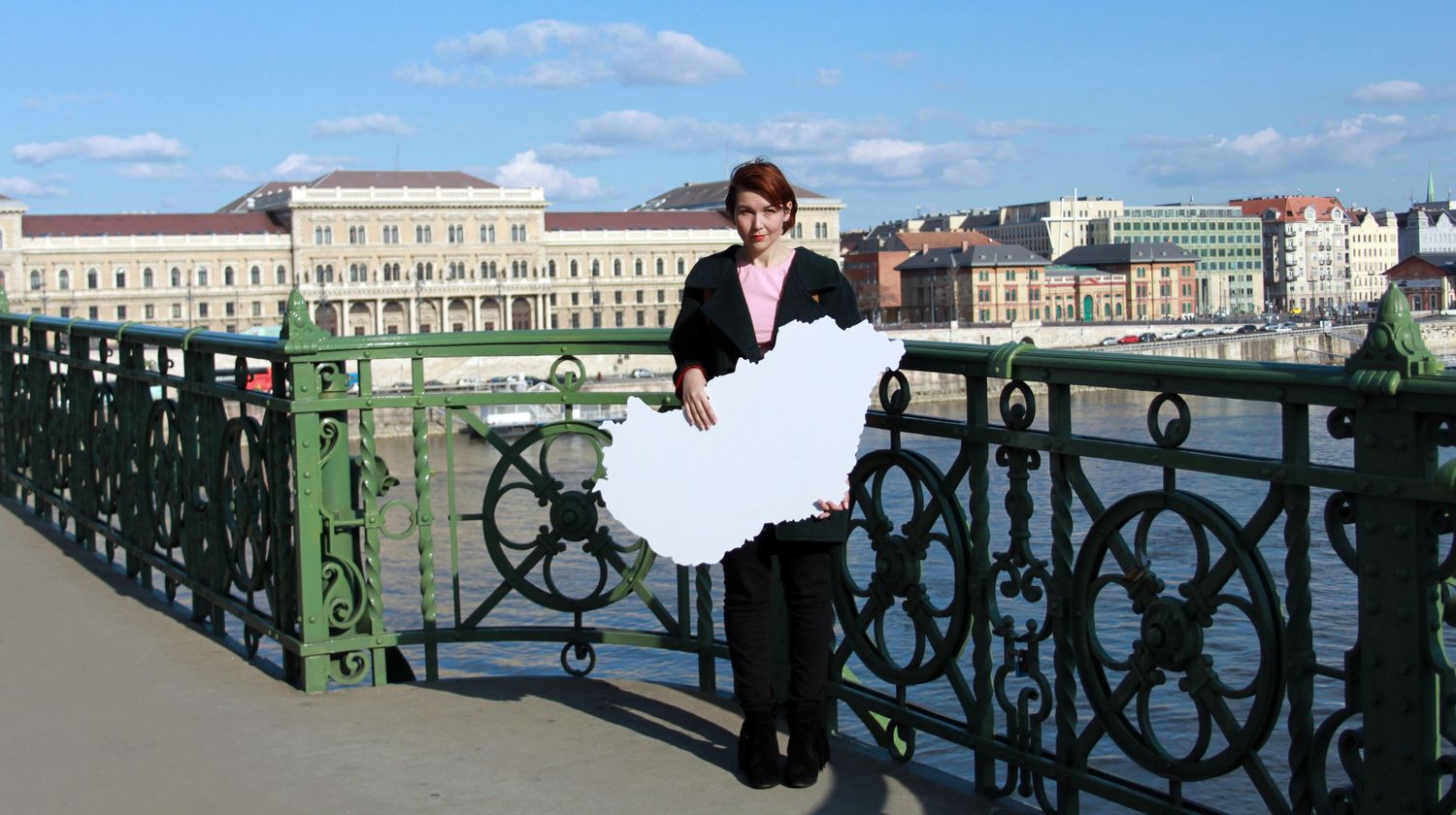 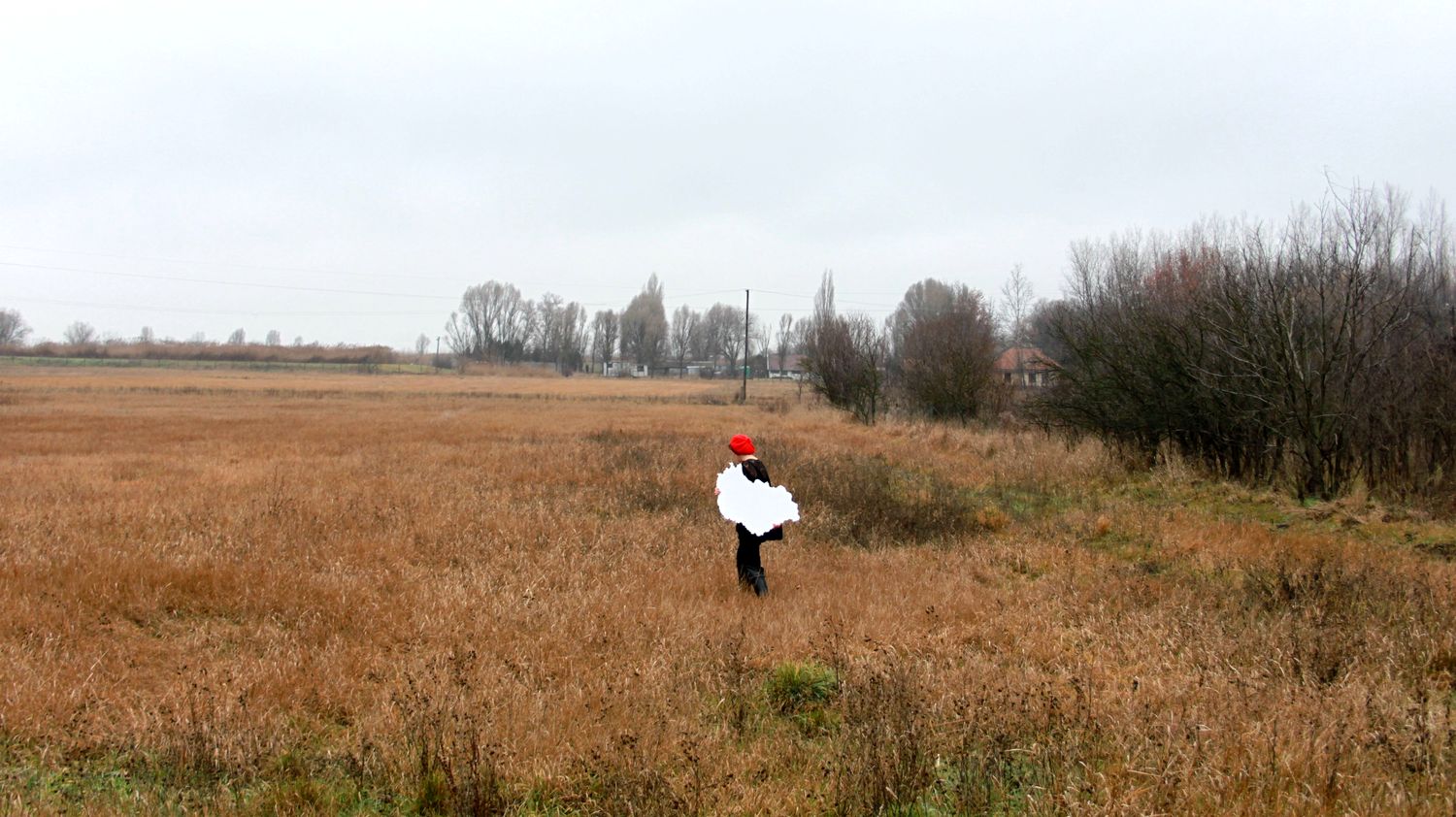 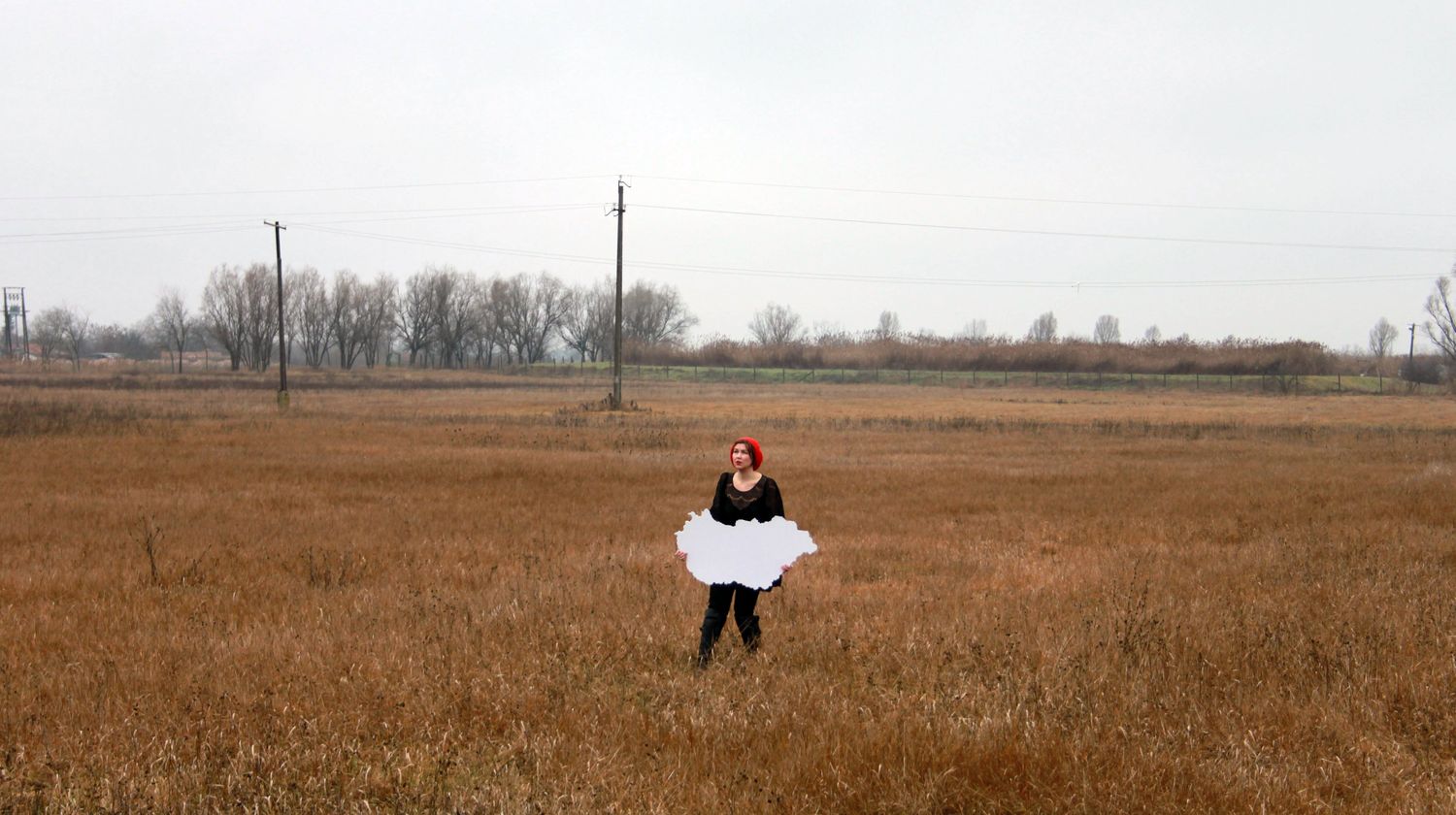 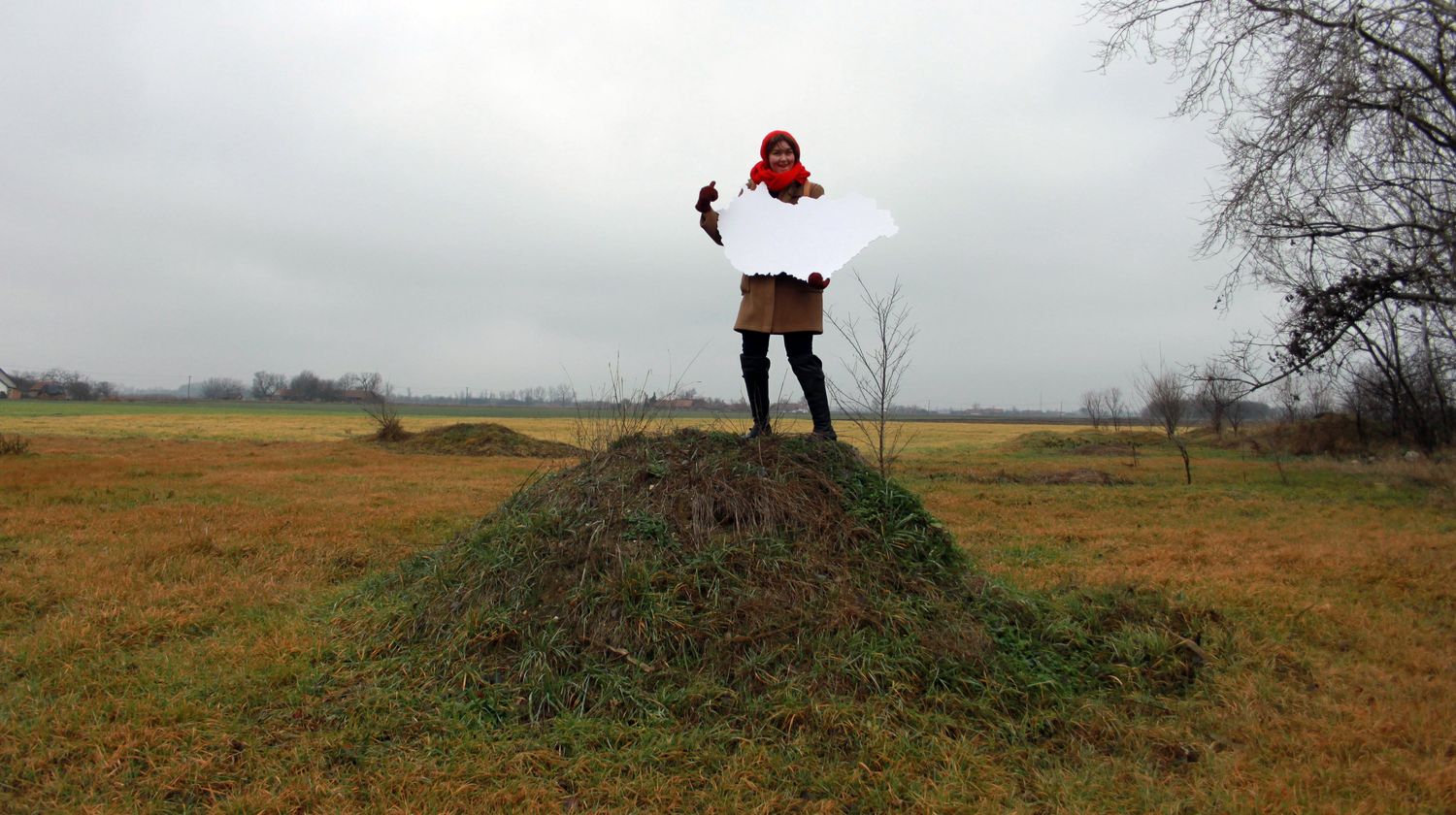 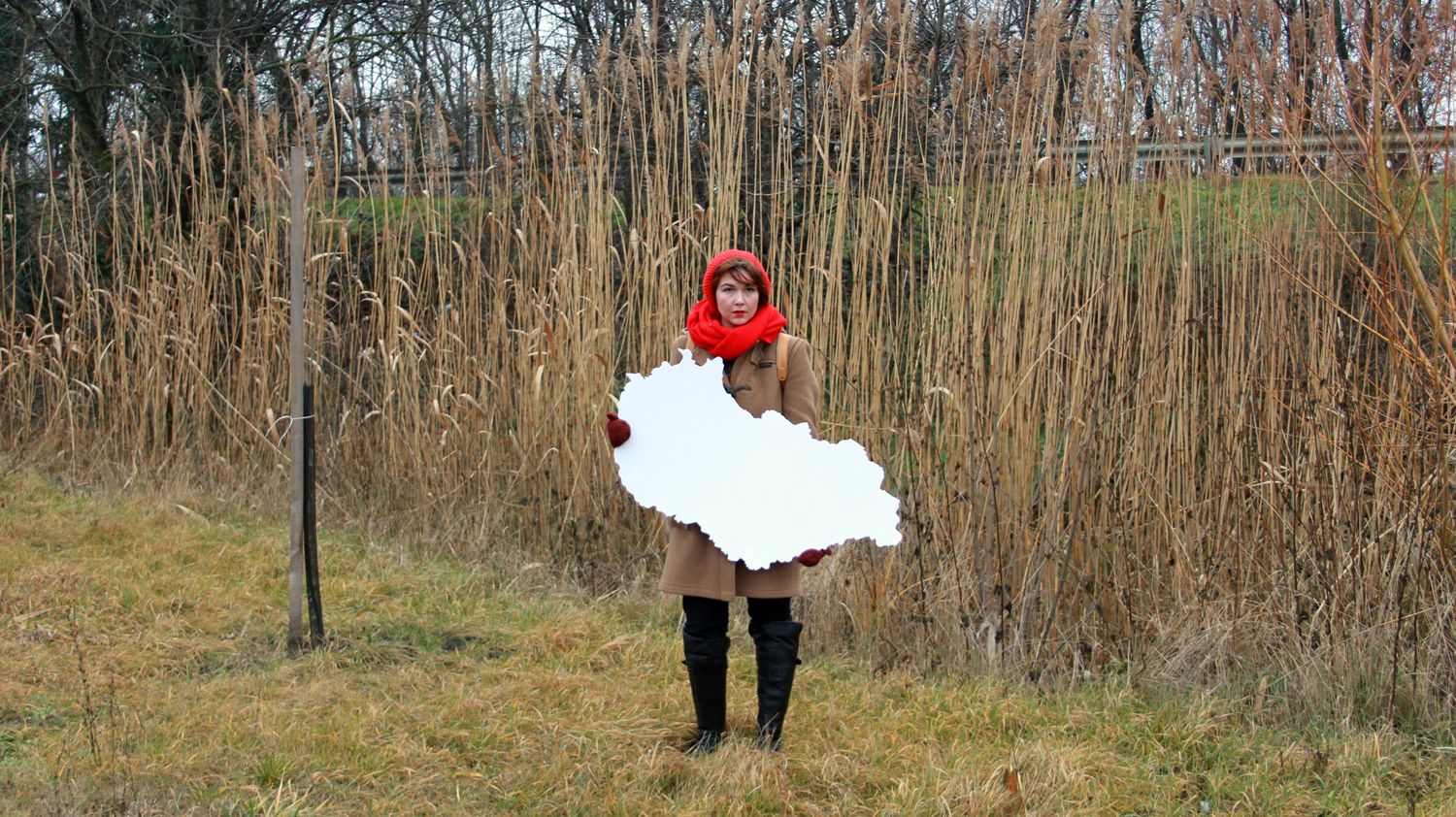 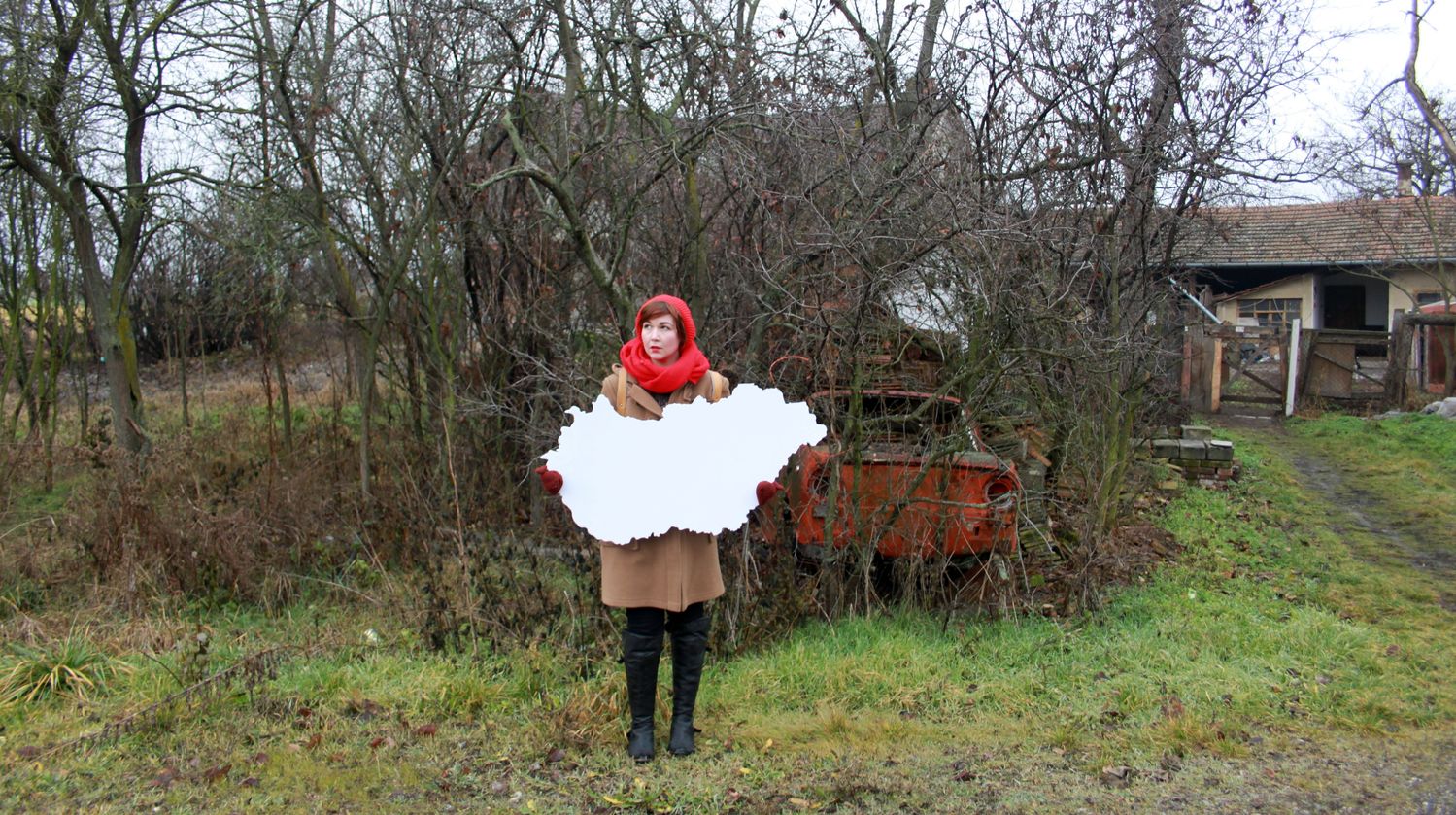 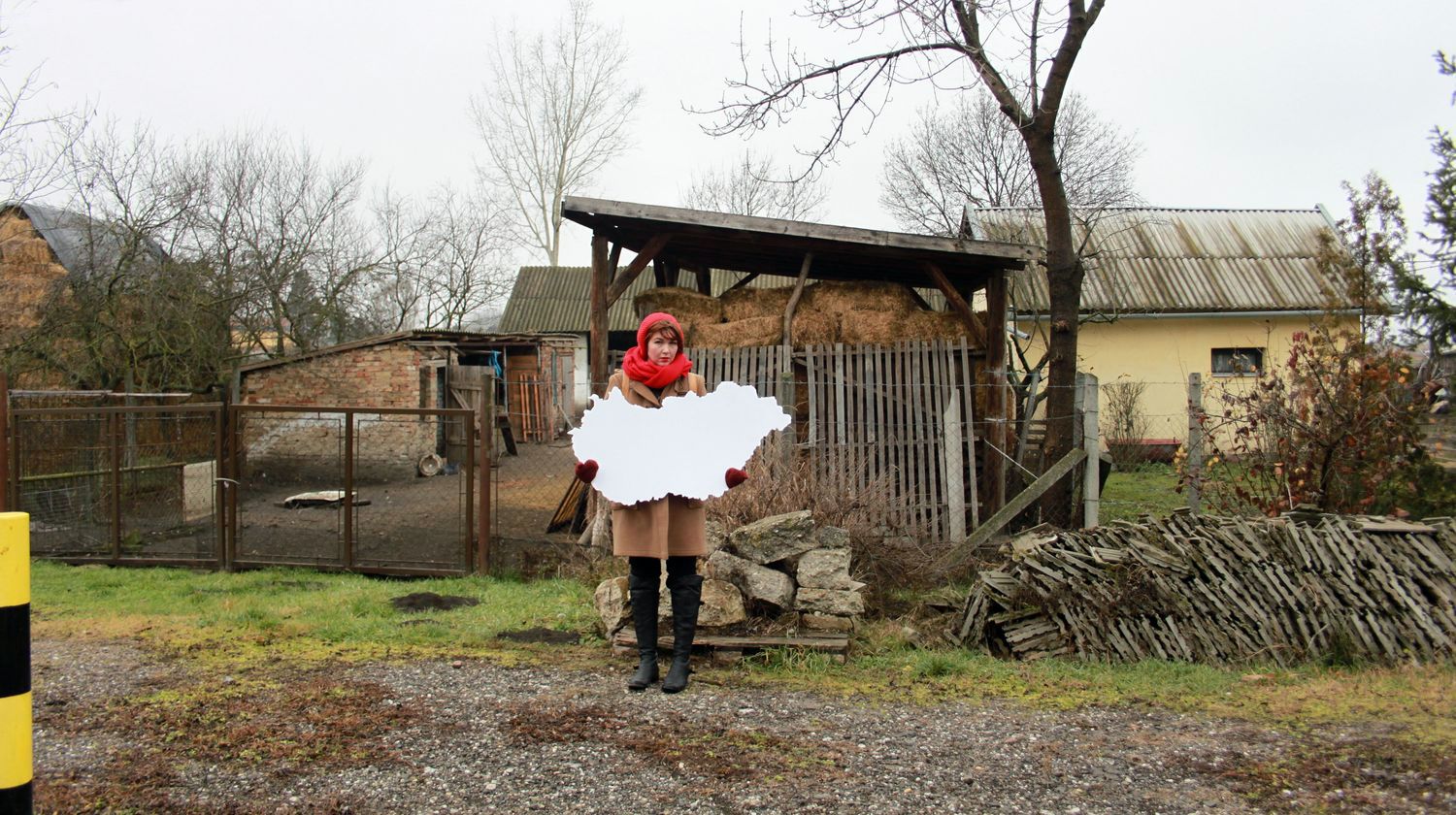 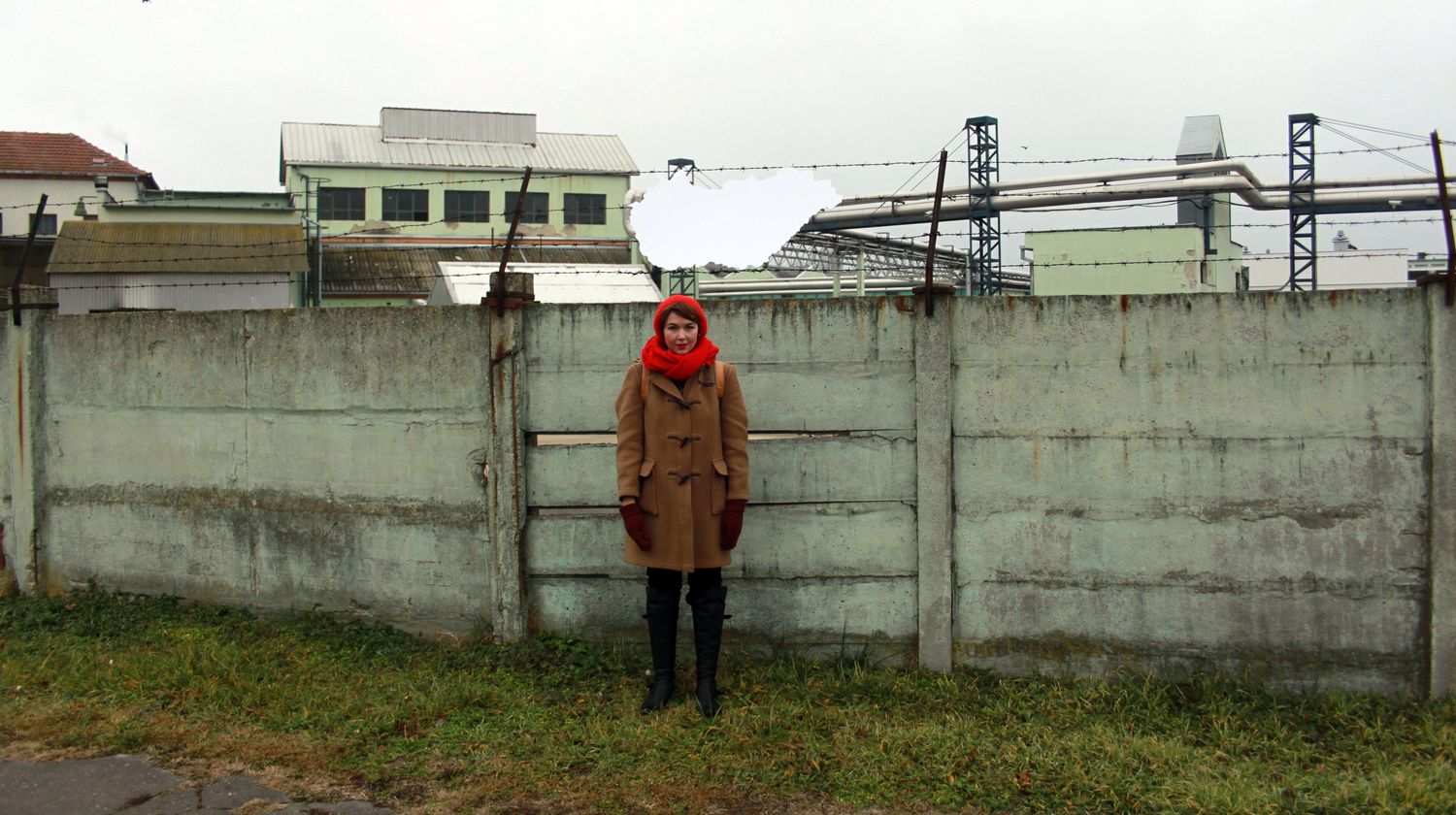 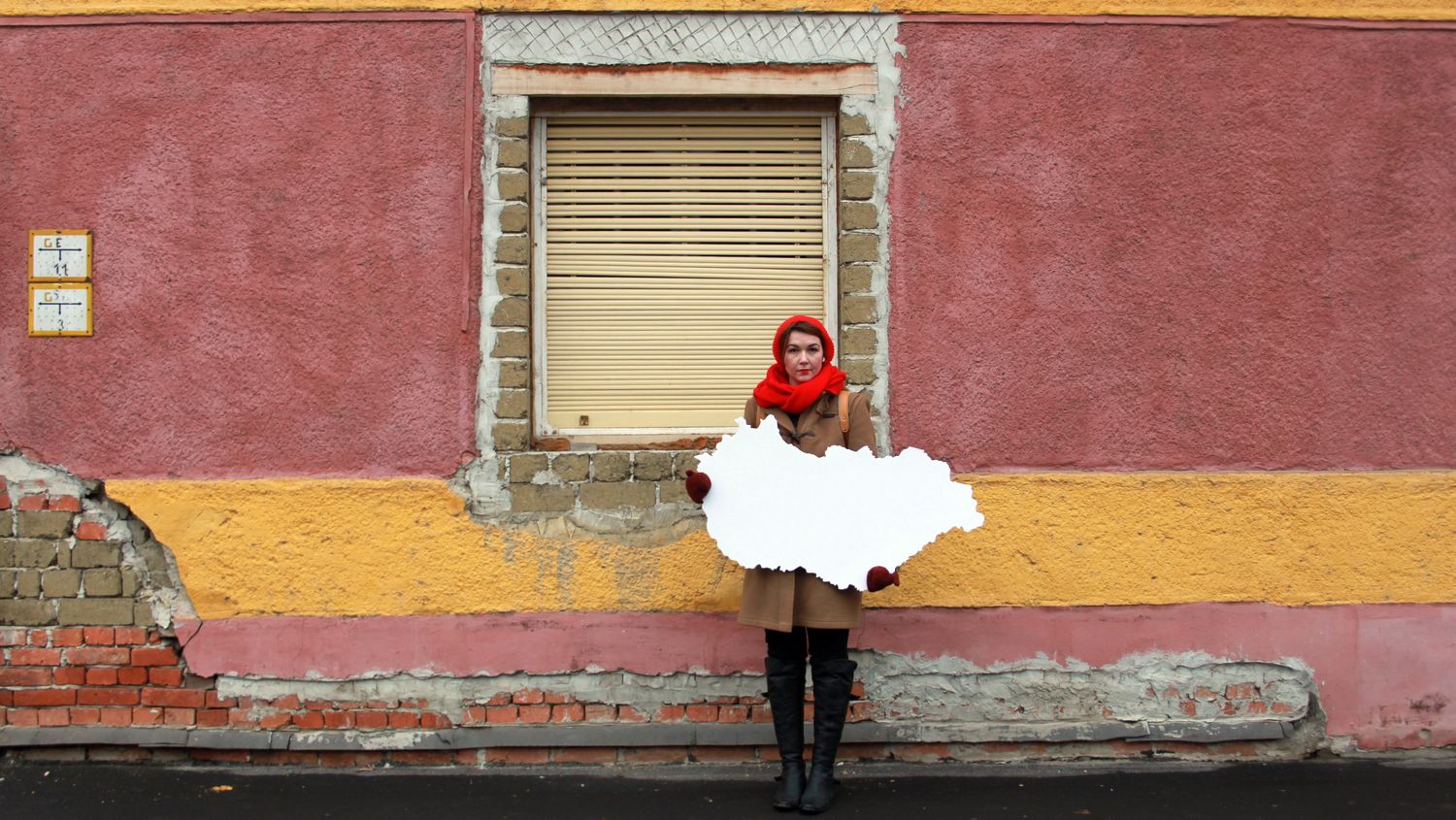 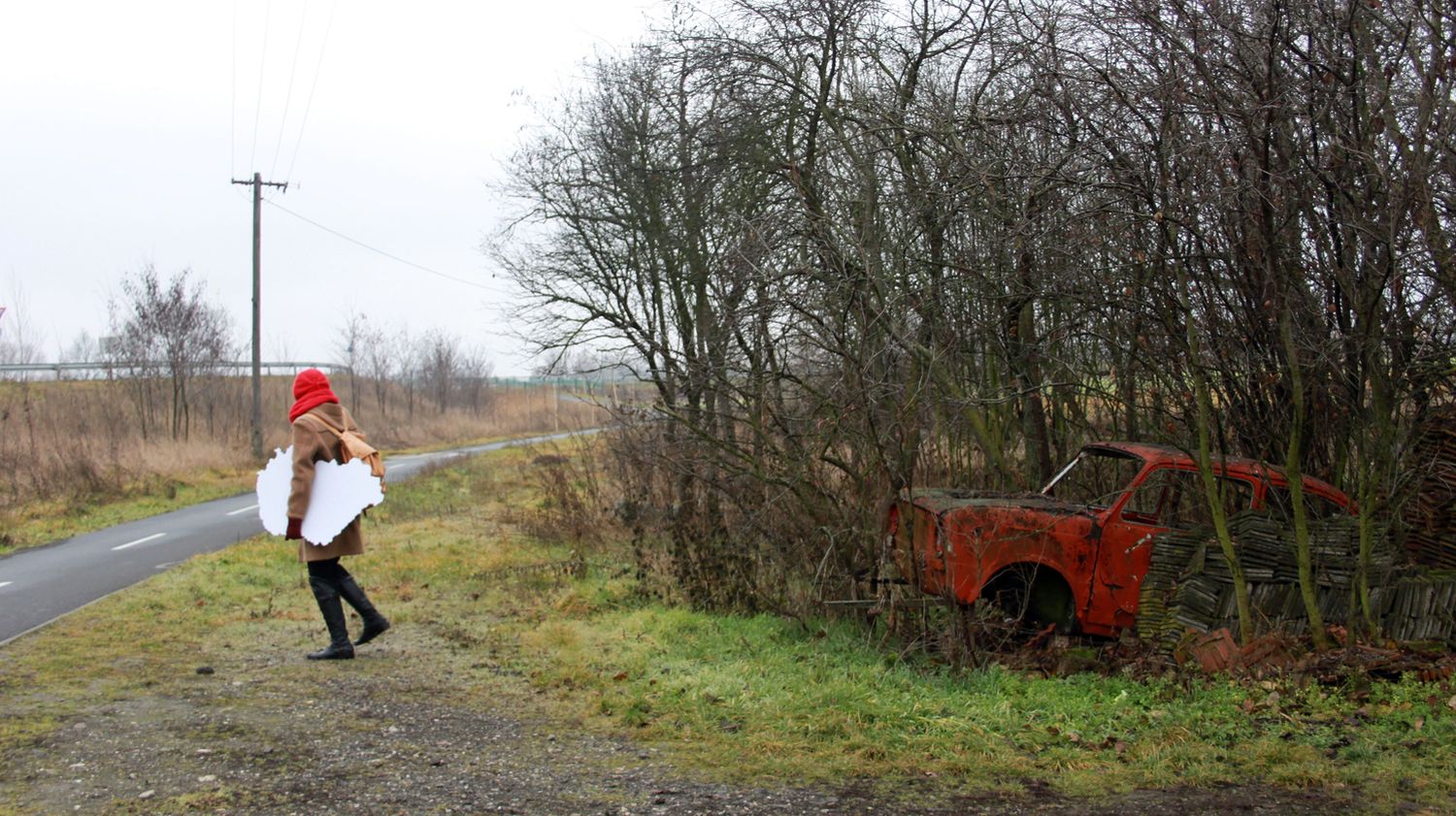 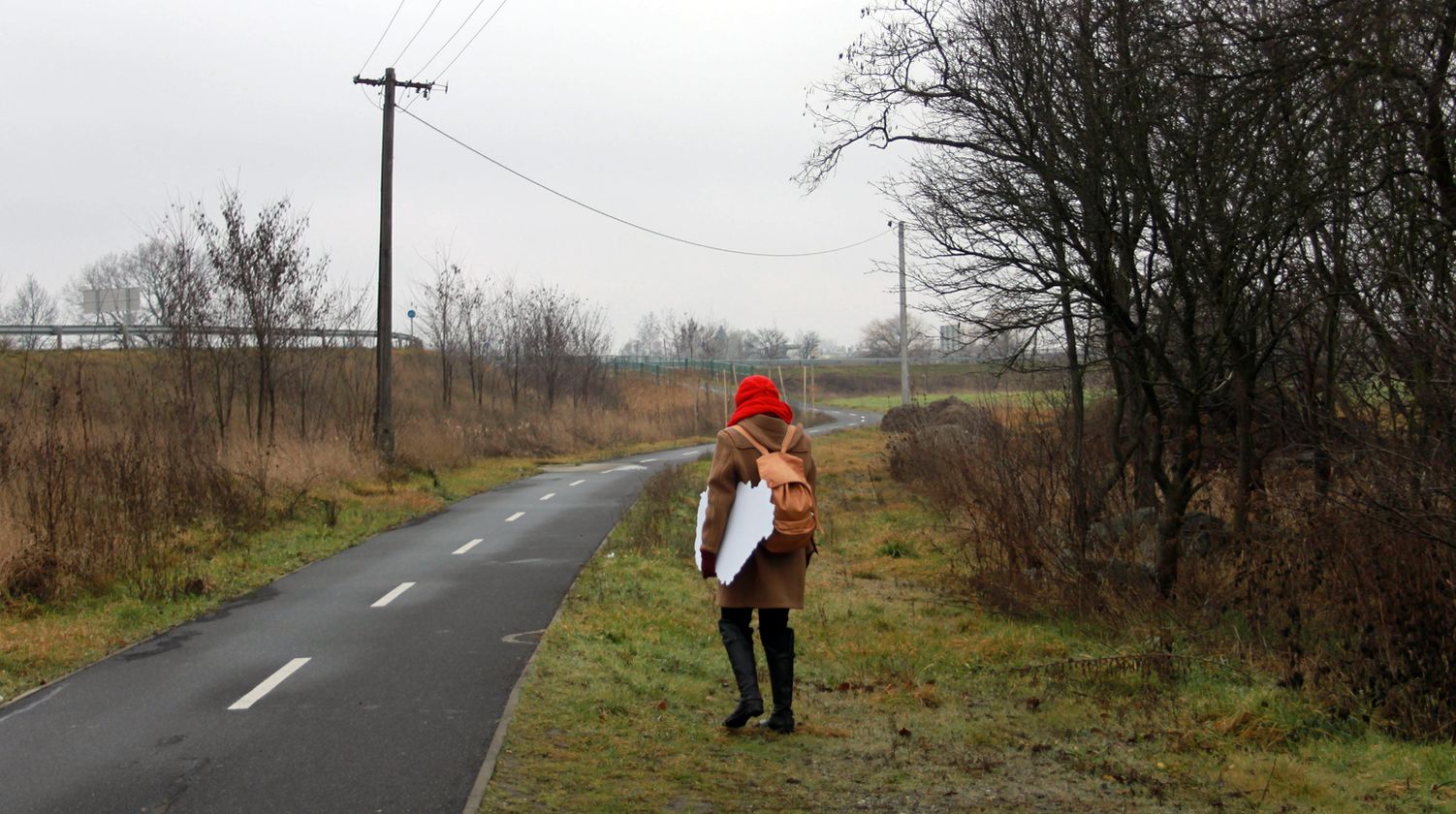 There is a woman standing by the highway. A red shawl­—or is it a cowl?—renders her face invisible. Under her armpit she is holding a huge piece of plane in the shape of Hungary. She is standing there in idle anticipation, like someone preparing to leave, as if waiting for a vehicle that would take her and her strange luggage away somewhere. She is as clueless in the solitude of this inchoate moment as she is aware: she is waiting for something, she is waiting for something definite to happen. She is waiting for someone or something to stop and move her and her unusual, heavy object out of the steadfast clutch of the given space and time. The object she is holding is a testing burden in two regards. On the one hand, the distances, latitudes and spatial dimensions that it stands for intimate great physical effort and, on the other, as a symbol of our homeland with its vicissitudinous history it refers to the struggles of the heart in the temporal dimension. It is not the mere idea of the nation that is plagued with trials and tribulations, of course, but the very soul of the people who compose and sustain it. What we have here is but an individual who has taken the pain of a whole nation upon herself and who tries to do something with it, to find her bearings, to go somewhere with it.

This theme, namely the fate and destiny of the Hungarian nation is always relevant to the minds of thoughtful and caring Hungarians, and as such it is surrounded by neverending uncertainty. Even though, it should be the source of grounding energy for the people living within its boundaries there is always something going wrong in Hungary. Now it is the artist herself who leaves home clutching conscientiously the sacred luggage, the Hungary cut-out in her armpit. Whereever she may end up and whatever lot may fall to her the idea of her homeland is ineradicable form her mind. It is an idea for her that she could only face as a biological entity in the utmost purity of her body and her mind. Herbert paints her life-size naked self and then grabs and uses the Hungary cut-out as a shield against it (Sweet home, 2014). As if she were saying: ’Look, this is all, I have got nothing more.’ Behind the somewhat lofty depiction philosophical and emotional motifs intermingle along with the spectre of small-scale human drama. Can we live up to external sets of expectations all the time or is it more important perhaps to look inward and monitor the internal milieu? Questions like these inevitably arise. The individual stands face to face with the world, ready for the challenge. She stands naked for the whole world to see.

As we have said above, a nation is composed of people, and ultimately it is the people who are responsible for the purity, the state and overall well-being of that nation. The question is: Are they ’up to the mark?’ Do they have the integrity, the strength of character and the unswerving intent to look into themselves, and to do something about their flaws? The motto of Herbert’s exhibition implies, in effect, that all too often we are afraid to face the facts and the consequences of our actions. What is more, we deliberately repress them in our mind. We know all the problems but we ignore them thinking that somehow others will solve them for us anyway or that leaving them unsaid simply makes them nonexistent.

This is wilful blindness in action. A kind of blindness that in certain historical moments may affect a whole nation like the plague. It is not an exaggeration to say that we live in such an age at the moment. The soul of our nation is sick. Not only ours but others’ too. And though we came to this world as lambs of god we act and behave like gregarious sheep (Lamb frieze, 2013-2014). We have lost our way. The world just keeps slipping through our fingers. The question is whether temporarily or for good. Lamb of God, you who take away the sins of the world goes a Christian song. We have we strayed far from this indeed. We became sheep seeking the warmth of the fold and accomplices too by remaining silent when we should raise our voice. Herbert writes: ’’I try to channel my creative energies toward significant issues that concern the public in general; issues that deal with everday life, our individual selves and the context within which these unfold and function: the country, the homeland. Things need to be integrated so that culture as such once again may assist us in becoming more present in our own lives both on an abstract or philosophical as well as a more concrete and realistic level.’’ The artist encourages herself and us as well to find ourselves and put our foot down at last. Here is a call for us to step by the wayside with the symbol of our country under our arms and wash our dirty laundry both in public and private.

The artist tackles the topical ethical dilemmas of the nation with boldness and wit. Nevertheless, her works are free of political overtones. Rather, they are presented in lyrical strokes of formulation, with language that is fresh and light.