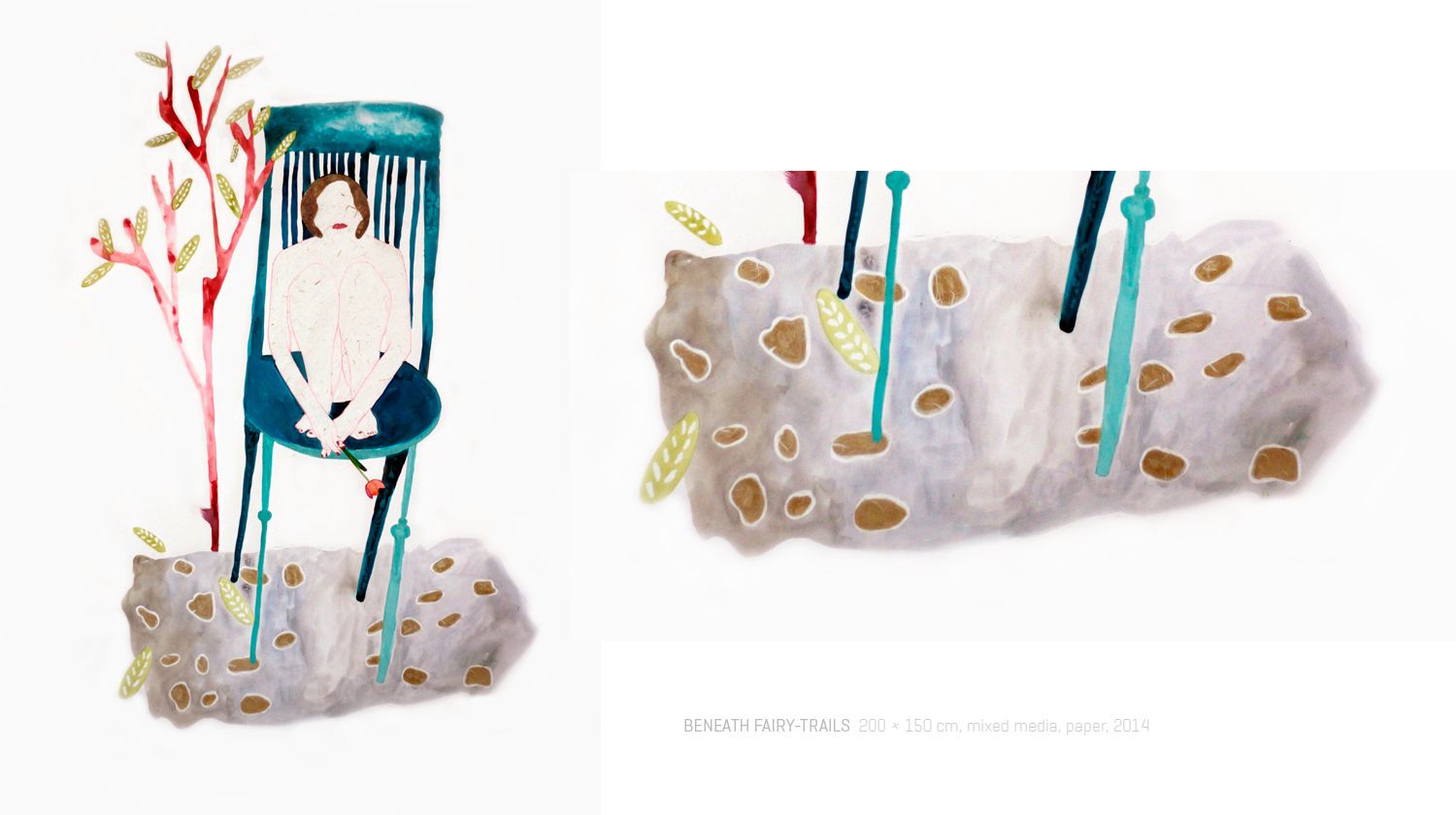 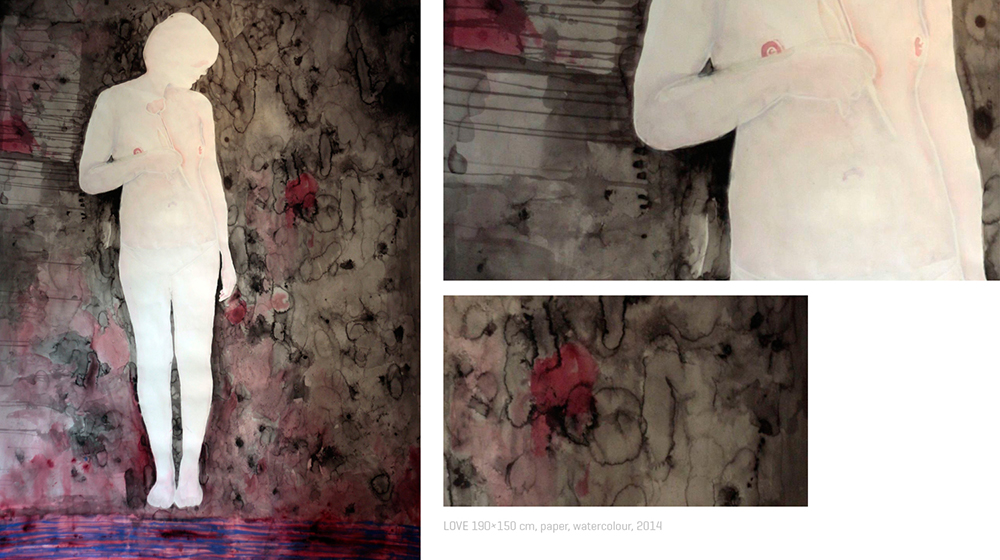 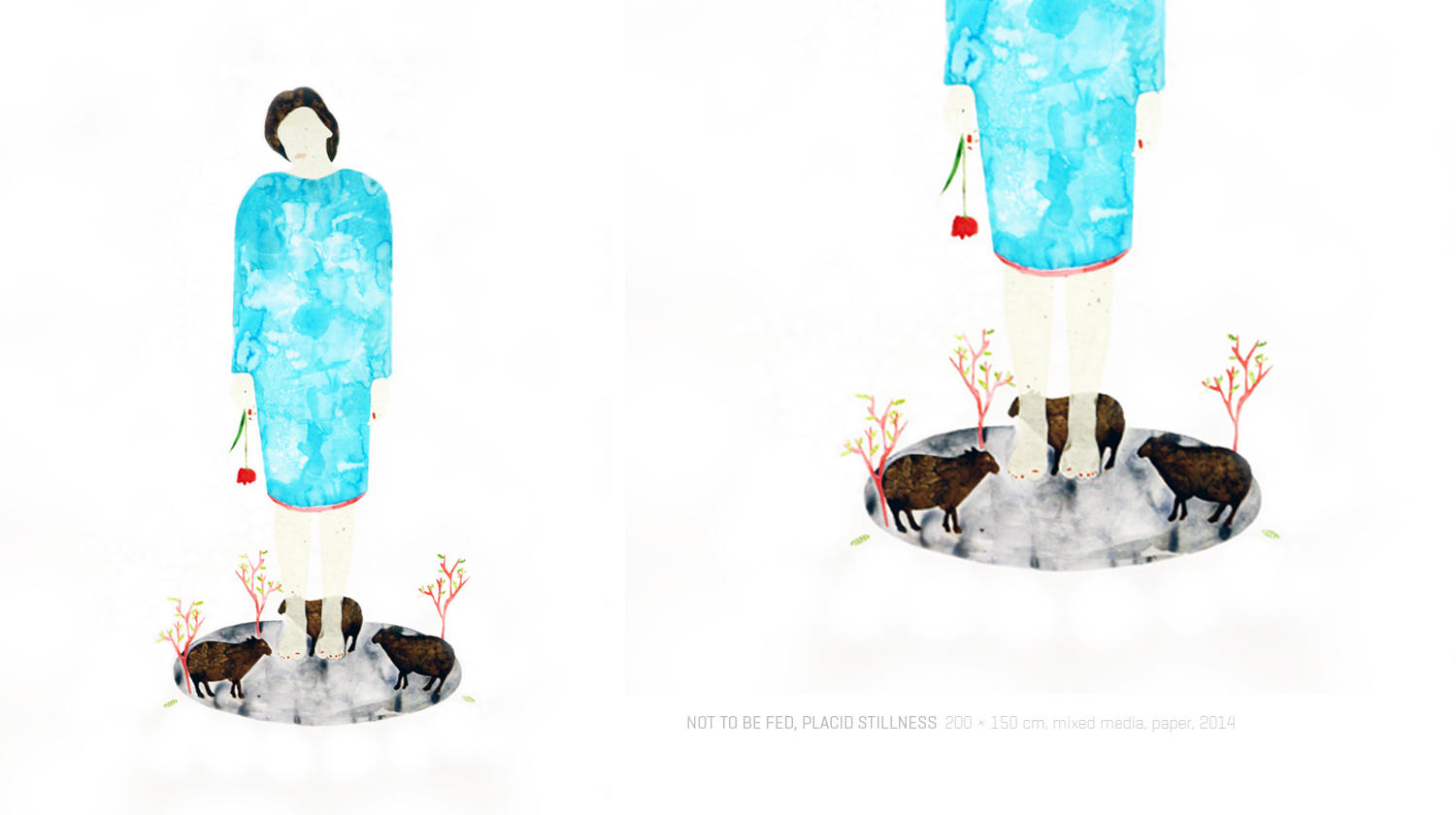 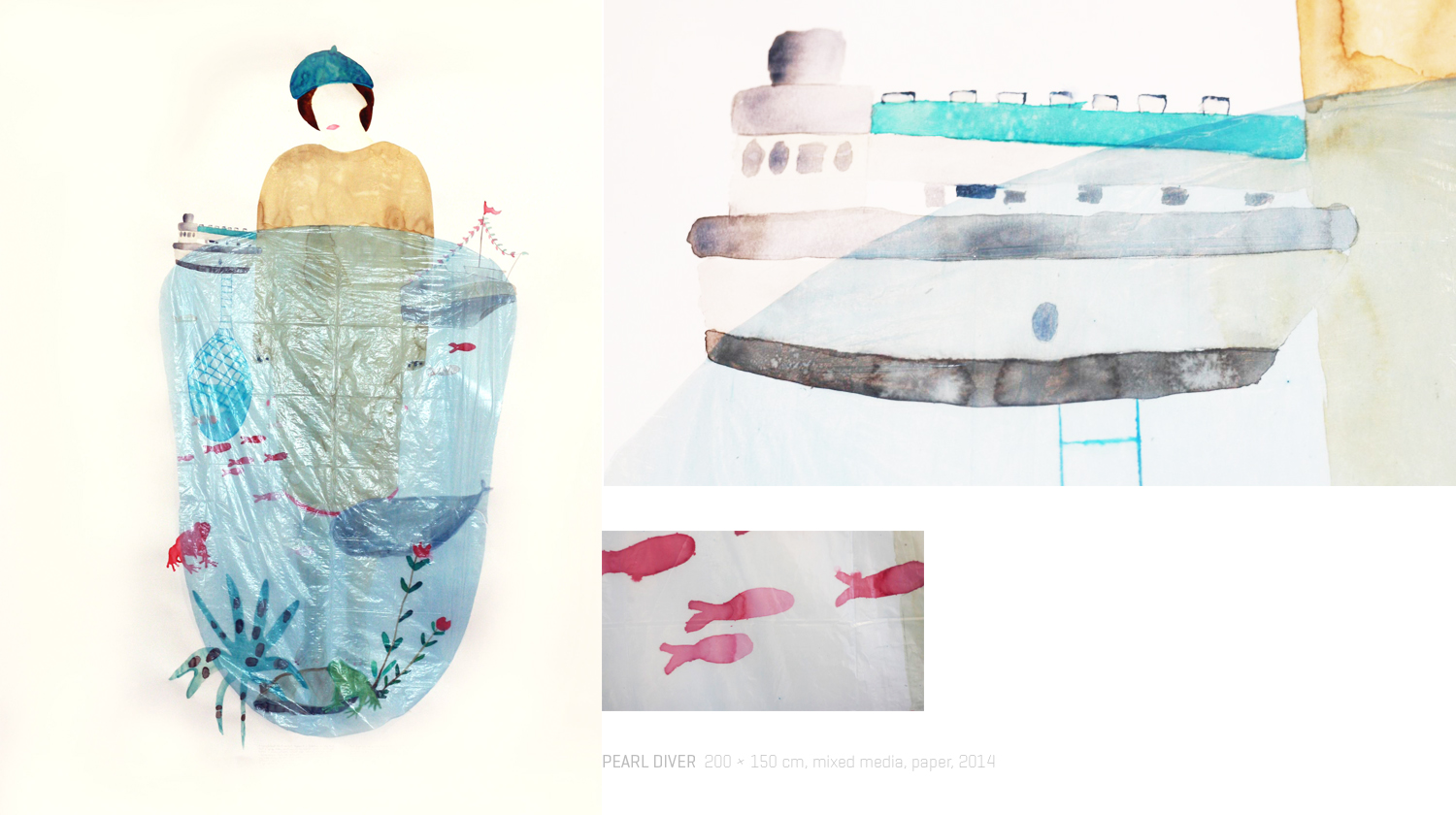 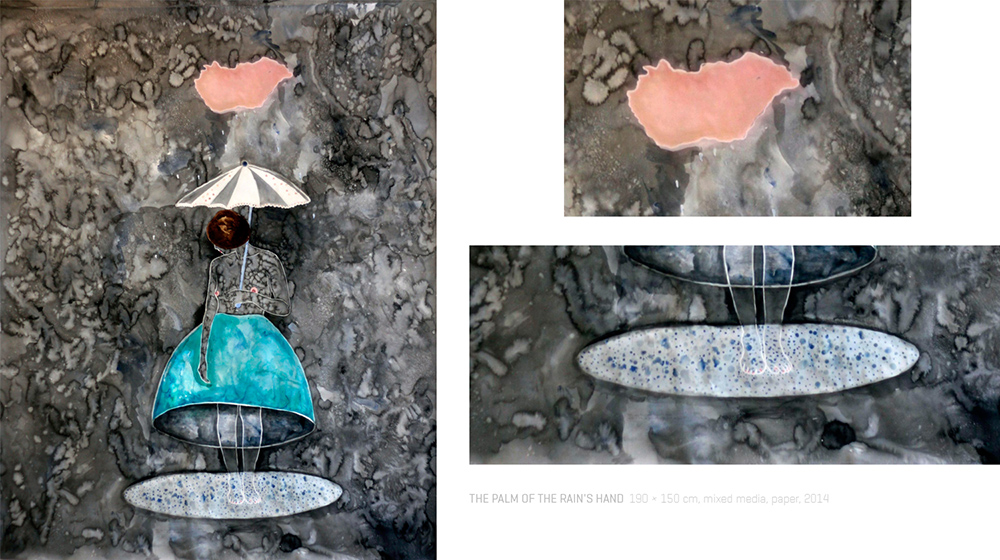 There is a girl. She sees and observes things for me. She unpacks the chest, to the point where she finds nothing there. I am her chest. My head is light, I never have eyes. She is drawing a mouth, in red. In one of the pictures my nipple is pink and I hold the umbrella in vain under the Hungary-shaped cloud. I am a woman. I float among black & grey blots, my body is airy and lonely. I deliberately do not see anything of myself. Even though I am showing it. Here is a tree, hearts are falling from it. Or here is this sack, sewed onto heart. Painting it all into a fairy-tale. With frogs and lambs. We are similar. Allegedly, the human heart beats 2,5 billion times during a lifetime. It weighs 300 gram and its diameter is 90 mm. We know how many chambers it has and what kind of muscles compose it. The only thing we don’t know is its why. Its how? How is it possible that it can be opened like pasteboard and be wrapped around another one. Without letting it spoil, escape or evaporate. How is it possible to love with the size of 260 mm?

Hearts. Can be trans-planted but not warmed up. Because they may grow cold. Like a country so tenderly pink as the skin of a pig. Because this girl can see and is blind at once. She is happy and unhappy at once. This girl has and at the same time has no home or homeland where she belongs. She has a body. Crouching, with averted gaze. An average body holding flowers. It is not hiding away like the heart behind the sternum. The heart is removable only when it stops, when it ceases to pulsate. This girl is headstrong, though. She does not care whether it is still quivering or not she takes it out anyway. She has a task. The task to be. To be present. She is painting pictures of me. No. She is painting pictures of you. Of themselves.

Watercolor, rice-paper. Everything that requires time. Wherein water and material blend together. This exquisite mixture will be her subject even when she creates moving pictures. It is both visceral and conceptual. Lyrical and concrete. As if twins lived inside her. She is feeding and deploying both of them. Primal and modern. Philosophical but not esoteric. Wise but childlike. Playful.

Ink: shellac, some additive and soot. Like blood. A blend of colors and cells. In Egypt it, the ink, was made from the hull and sprouts of legumes and fluids extracted from squids. Carbon and water is the material that composes humans as well. Herbert Aniko works fine paper into used wrapping-paper, fills a velvet-covered box with flax-seed. Not afraid of the strangeness and otherness of materiality. Looking at the expensive piece of paper as it becomes entwined with the used one and as the colors intermingle on their surfaces I suddenly see ourselves again. The human. For what else is the human than the idiosyncratic synthesis of the organic and the garbage? That our blood paints our life under our skin the same ink-like way as Herbert Aniko does on the surface.

Herbert Aniko is brave, and what I respect even more is her candidness. Nothing is impossible for her. I can only thank that Varratok (Sutures) could be the vein and my words could turn blood in this peculiar space. And as the forever thin and brittle hope has to live on and exist so does this visual space exist. With stuffed forms and timeless clocks. They are made of her. Of the girl. Of the one who became blind for us. Who is in love because of us.